On August 1, 2022, Congress passed the Camp Lejeune Justice Act as part of the PACT Act (Promise to Address Comprehensive Toxics). This bill as a whole is the largest increase of health benefits for veterans and their families in the United States in more than thirty years. It is designed to provide real benefits for those that have been exposed to toxic materials during military service.

Camp Lejeune is a Marine Corps training facility located in Jacksonville, North Carolina. It was built in 1941 and still operates today. In 1982, studies showed that Marines, their families, and civilians living on Camp Lejeune were drinking, cooking with, and bathing in toxic water containing volatile organic compounds (VOCs). They also found this had been going on for over 30 years. Many of them have developed catastrophic injuries and the Neumann Law Group is here to help. Although the water contamination at Camp Lejeune was not discovered until the 1980s, this highly dangerous water was actually being consumed since the early 1950s. 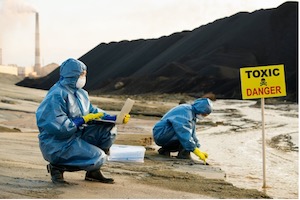 Cancer causing chemicals were being dumped into storm drains, radioactive materials were buried, and a nearby dry-cleaning business also dumped chemicals into the drains. Despite being well aware of the contamination in the early 1980s; the Marine Corps failed to release that information to the public or to investigators. Even after receiving this information from military chemists, Camp Lejeune did nothing to further investigate the results. In fact, they made efforts to hide their knowledge of the toxic and contaminated wells on their properties.

How bad was it?

Chemists began testing the wells directly in 1984. It was only then did they find out how bad it really was. Ten wells onsite Camp Lejeune were closed over the next year. Camp Lejeune allowed its residents to continue to drink, cook with, and bathe in toxic water for 4 years while being well aware of the danger they were in. Federal scientists eventually determined that this water had been contaminated at Camp Lejeune since the 1950s.

Soldiers and citizens were exposed to and consumed the following contaminants:

As previously mentioned, these chemicals are carcinogenic, or cancer causing.

When the EPA (Environmental Protection Agency) got involved, during their investigation, they found that the Marine Corp and Camp Lejeune made every attempt to deny that the water supply provided to its residents was contaminated and provided false reports and documents. The Marie Corp and Camp Lejeune had also failed to report to the EPA or the state that they were leaking over 1,500 gallons of fuel directly into the earth each month until 1988. The spill occurred in 1979.

You may Be Entitled to Compensation

According to the website of an advocacy group called The Few, The Proud, and The Forgotten, many housing areas were affected by the contamination, including Tarawa Terrace, Midway Park, Berkeley Manor, Paradise Point, Hadnot Point, Hospital Point, and Watkins Village.

Hundreds of thousands of people have been exposed to these toxic chemicals. If you lived on Camp Lejeune for 1.) at least 30 days; 2.) between August 1, 1953, and December 31, 1987, and; 3.) developed a serious medical condition, you may be entitled to financial compensation. These diseases may also have affected pregnant mothers and their unborn children while living on Camp Lejeune:

Were you Exposed in Utero?

Due to the PACT Act and the Camp Lejeune Justice Act, Veteran Marines, their families, and civilians that were unjustly exposed to this toxic water supply may now be entitled to make claims against those who have failed to protect them for so many years.

If you or a loved one have been diagnosed with cancer, or one of the other conditions listed above, after living on Camp Lejeune, the attorneys at the Neumann Law Group are here to help. You can speak with one of our qualified intake specialists at (800) 525-6386 or complete our online form. We have attorneys in Grand Rapids, Detroit, and Traverse City at the ready to fight for those who fought for use and for their families. We can also help people who have been injured from defective medical devices, consumer products, or motor vehicle accidents.